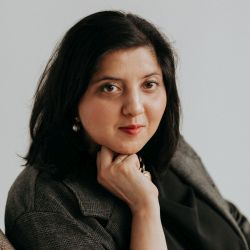 Mahdis Azimi founded her immigration practice in 2019. She has been practicing law since 2015. She received her Bachelor of Arts in Political Science from the University of Illinois at Chicago and her Juris Doctor from Loyola University Chicago School of Law. Ms. Azimi practices exclusively in the area of immigration law. Specifically, she maintains a practice in removal defense; bond and custody redetermination; asylum; waivers; family-based immigration matters; naturalization; and nonimmigrant visas, among other areas of practice.

In addition to her practice, Ms. Azimi is an active member of the American Immigration Lawyers Association and the National Lawyers Guild. Specifically, she serves on the board of both the National Lawyers Guild, Chicago Chapter and is an active member of the Chicago and Michigan Chapters of the American Immigration Lawyers Association. Ms. Azimi also actively volunteers with several Chicago-based organizations. She is a proud Iranian-American and currently resides in the West Town neighborhood of Chicago, Illinois. She is grateful and honored to represent immigrants because, as the child of immigrants, she realizes how much courage it takes to leave the familiar and pursue your dreams.